Each end of year, a great many people reflect on the year past, and look for signs about the year to come. Was 2022 a good year, or a bad one? Will 2023 be better? Or are we heading toward more difficult times?

Each end of year a great many people reflect on the year past, and look for signs about the year to come. Was 2022 a good year, or a bad one? Will 2023 be better? Or are we heading toward more difficult times?

We are not looking for cheerleading or motivational slogans. We seek clarity to the extent possible.

Assessing the past, and anticipating the future are two very different acts of mind and spirit.

The past year genuinely did happen. There are facts available, both personal, and social and global. We do not want to ignore reality on the one hand, but we do not want to be overrun or dictated to by data, on the other. Reality is a blend of evidence that should participate together with the transformative force of our spiritual confidence and command.

The year to come similarly blends evidence with interpretation, But it is more a matter of prediction. Instead of historical facts and data, we seek rather to grasp signs and pointers.

So how do these years measure up? By my read, 2022 was a good year, and 2023 will be better as the successes of 2022 take root, settle in, and become the basis for continued growth and improvement.

For people concerned with religious and spiritual life, and with issues related to interfaith, and to religion and peace, there is much in what we experienced this past year that is worrisome. Foremost in our troubles, I believe is clearly active war, followed by provocations toward war among major world powers.

The Russian attack on Ukraine is the world’s most serious problem from 2022, and the provocations are next, most especially actions by the CCP vis a vis Taiwan.

The next most troubling global breakdown is the rapid destabilization of Western and other free, democratic nations.

Finally, 2022 witnessed a far-reaching breakdown of trust in virtually all public institutions, including such extreme abuse and lawlessness by governments that used to function as sources of hope for emerging nations.

Factors that would invite us to think of 2022 as a bad year are these: 1. Major global war, reaching hitherto unthinkable levels of belligerence all the way up to threats to use nuclear weapons. 2. Threats of global war among super-powers such as tensions around Taiwan, and finally 3. Global breakdown of trust for institutions which formerly represented stability, hope, and progress for our human family; government, media, all levels of education including elite universities, the medical establishment, financial institutions, elections, and all else that is required in the delicate and fragile balance of social progress.

Dysfunction at this level of magnitude challenges any who would wish to report an experience of God’s light and progress toward in 2022. But I believe failure to confidently report on God-inspired human progress comes more from a misdirected gaze, focusing on the wrong points of perspective.

We are in the middle of radical, historical upheaval, and chimera of true human horror described above are the violent rattling of historical change, and the transference of Divine Spirit in human affairs. Each of the institutions being exposed for deep rot, corruption, and abuse, properly earning the distrust of freedom seeking citizens worldwide are bound either to reform at deep levels, or decline precipitously, even to non-existence. The intensity of the troubles have an modest armageddon feel of sorts, not of a supernatural or fantastical sort, but of the deafening grinding when the living God wrenches through rusted old forms, cracking and breaking old fault lines so that the brighter light promised in 1 Corinthians 13:12 will shine into our lives.

The religious and interfaith community must be bold and confident in faith, and must have the courage and vision to lead, to be loud and bold.

It is wrong for religious leaders to chase after secular causes in the hopes for acceptance in a secular age. The work of religious and interfaith leaders is to herald the bright roar of grace that speaks of a God who is greater than change, greater than war, and who can storm through human heart and passion to bring about renewal and hope.

2022 saw a thousand new talents, a thousand new artists, visionaries, writers, and heroes. When tech was not whoring itself, it served as a magical platform for us to discover one another and perpetrate goodness faster and more broadly than ever in human history.

2023 will see more of the same. We are in a time of blinding progress. The people of good must be strong. But the people of religion and spirit must lead. We must shake off our lethargy and timidity, and step up. Our times are good, but they can tumble and fail. Twelve Gates Foundation exists to reveal and advance the truth that God authors our history. We are not to cower. Our time is not woven of insecurity, worry, and fear. 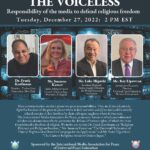